Saudi Arabian GP F1 2021: Race Results
Manhart Performance powers the Mercedes-AMG C63 S up to 711 hp
This is how Koenigsegg built the world’s fastest production engine
Dacia Duster 2022: the TCe version of 130 CV arrives in Spain!
The 4 gas station credit cards with the most discount 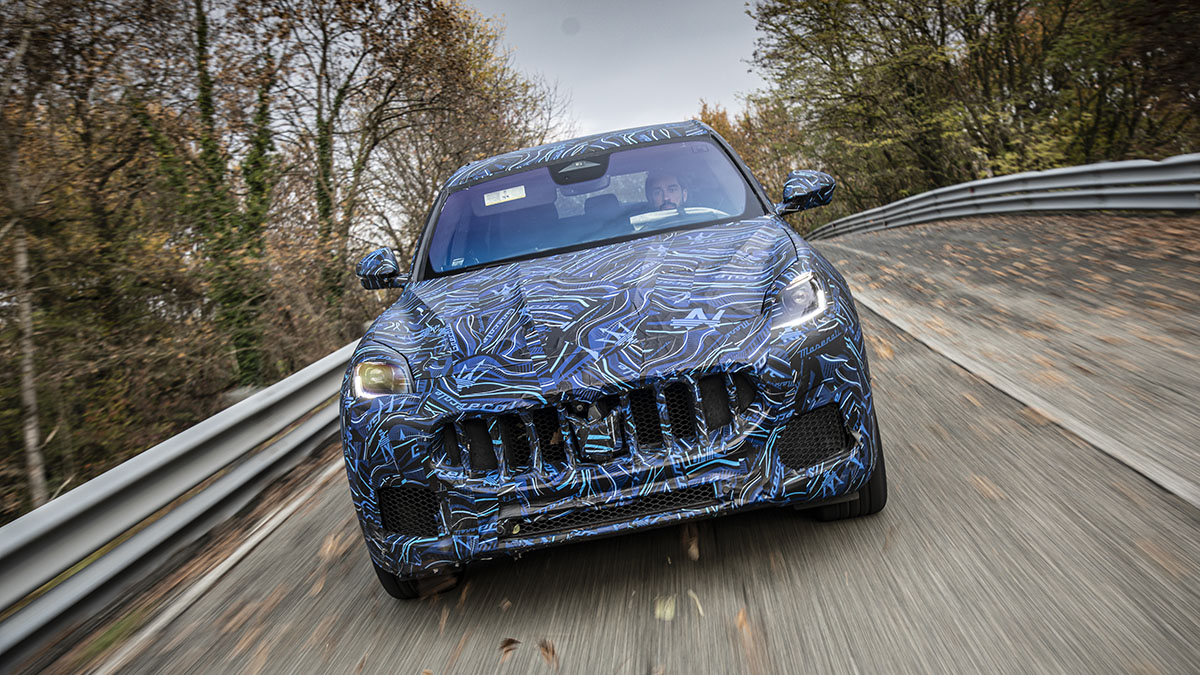 The Grecale is going to be Maserati’s top model for years to come. We have been able to test a 95% definitive pre-series.

Normally we are not very given to dedicating many pages to the camouflaged cars that pass through our hands, since the camouflage itself imposes many obstacles to the sensations that we can acquire. However, we are going to make an exception for the Maserati Grecale for three reasons. One is that it looks quite good, another is that it is the model in which Maserati has its greatest hopes in the coming years, and the last one is that only two Spanish media have had the opportunity to test it, and that must be given value. .

For this test, and given that it is an unregistered pre-series, we have come to the Balocco test circuit, the operations center of the new Stellantis in Piedmont, Italy. These facilities were created for Alfa Romeo in the 60s, but the successive purchases, takeovers and mergers made it happen to the Fiat Group and, now, to Stellantis, a conglomerate in which Maserati is integrated, although in a relatively autonomous way.

I remember the last time I was here was a presentation and test of a restyling of the Abarth 500, and the center is so big that I can’t even locate the track that that little guy drove on. Right now we are having a coffee in one of the main buildings while I observe in detail the body of the new Grecale, or what can be seen of it. The truth is that they have put a pretty cool camouflage compared to what usually happens in these cases, but equally effective when it comes to covering their more specific features.

What can be seen without filters are the general dimensions. At 4.84 meters long, 1.95 m wide and 1.67 m high, it is slightly larger than most of its competition, but exhibits proportions that blend very well with each other. In the age in which we live, it has surely happened to you once that of meeting a person with a mask and mentally building facial features more beautiful than they turn out to be. Nevertheless, Between the mental construction that I do in my head, and the digital images that I have been able to see of the car, I am pretty sure that Maserati has been quite right with the exterior design of the Grecale.

By the way, at this point you are still wondering why they have not let us see a car whose commercialization was scheduled for the end of 2021. The answer is that its launch has been delayed to the spring of 2022 as a result of the crisis of the semiconductors that the entire motor industry suffers from. Maserati tells us that it attaches great importance to the fact that there are no delays in the deliveries of vehicles to its customers, so faced with the risk that this could happen, have decided to postpone the launch of the Grecale for a few months.

The test will take place on an interior track that simulates the layout of a road. It will not be a long test, but hopefully it will be fruitful. The asphalt is wet in some areas and there are many wet leaves on the ground, so you have to be careful not to crash one of the Grecale pre-series against the guardrail. TOWe still do not know how the range of engines will be structured, but we do know that the one we are going to test is the least powerful. And, in turn, it will be by far the best seller.

Predicting that this Grecale will be the one chosen by the majority of customers is easy because it has many incentives: it is the only one equipped with a light hybridization system that gives it the ECO label, its 300 CV they are more than enough for 99% of drivers, and at the price level it will logically be the most attractive version.

Inside nothing can be taughtIn fact there is a custom blanket that covers everything. They let us lift it up a bit to see the frame and the center screen, but none of that can be shown at the moment. What we can anticipate is that there is a new multimedia system and a super cool central clock whose little screen can project the time, G-forces, a compass … or react to voice commands. Besides, it seems that there is a more than acceptable interior space and the trunk offers 535 L capacity.

I hit the starter button and peel back the interior camouflage a bit to select the D for the transmission. The box is, by the way, the always correct ZF 8HP50 so common in various premium cut models. The sound at idle is exhilarating, if a bit rough for my taste. Everything changes with a few strokes of gas, turning that initial sound into a much more convincing one.

Under the hood of this pre-series is a 2.0 turbo four-cylinder engine associated with a 48V micro-hybrid system, whose key elements are the BSG (Belt Starter Generator, which acts as an alternator) and the e-Booster electric compressor. It is, in essence, the same scheme already seen in the Ghibli, although with 30 less CV and combined with an all-wheel drive system. This Grecale micro-hybrid provides 300 CV of power and 450 Nm of torque with which it accelerates from 0 to 100 km / h in 5.6 seconds, reaching a maximum speed of 240 km / h. We do not have consumption data, but with a real figure that will be around 10.0 L / 100 km, it perfectly covers the place of a supposed diesel Grecale that will never exist.

Maximum power is relatively low at 5,750 rpm, and all torque is available from 2,000 rpm, which means there is plenty of power at low and medium revs.. It cannot be detected in an obvious way, but Maserati assures that the mocrohybridization system works more for performance than efficiency, feeding the e-Booster compressor that serves both to gain performance and to cancel the possible delay that occurs in the mechanical turbo charging. As a result, throttle response is instantaneous in almost all circumstances.

There are four driving modes (Comfort, GT, Sport and Off-Road) and, although it is a prototype, they propose perceptible variations in the response of the accelerator, transmission, direction and engine sound, with the opening of valves in the exhaust. And also the optional adaptive suspension if it is installed, which happens in this unit. This damping, in addition, can be combined with air springs that offer a suspension travel of 65 mm, being able to lower it 35 mm on the road or raise it 30 mm in the Off-Road program.

In the second lap I already connect the Sport mode, in which all the movements of the Grecale are sharpened. The steering is very precise compared to its competition, the suspension smoothly copies the undulations of the asphalt and Brembo brakes with four-piston front calipers appear to deliver high performance.

Its 1,870 kg of weight are compatible with it being a agile vehicle in sporty driving. Being a pre-series it would not be fair to compare it directly with its rivals, but it is undoubtedly more alive and dynamic than alternatives such as the Jaguar F-Pace or the Range Rover Velar, although it may have a little left to reach the level of the Porsche Macan. Of course, it is a pre-series, so it still has room for improvement. In addition, its 2.90 meters of battle endow it with high stability and its optional limited-slip differential, which equips this unit, provides it with a motor that, at least in this short test, does not present any deficiency.

This new Maserati has already started to be manufactured at the company’s plant in Cassino, in the Italian province of Frosinone, but we will have to wait until spring to see, touch and test the Grecale in all its fullness, repairing all those details to those that, at the moment, we have not had access. This unit is 95% final And it has some things to polish like any self-respecting pre-series, but it is a good starting point to find a definitive model that, at least, questions the leadership of the Porsche Macan in terms of driving, a challenge so incredibly difficult that it is already commendable. just try. See you in three or four months …

The Maserati Grecale is the fourth vehicle to use FCA’s Giorgio platform, which is also used by the new Jeep Grand Cherokee and the Alfa Giulia and Stelvio. By driving touch it is with the latter that the Grecale has more things in common, although Maserati has made certain adjustments for its model in order to enhance the dynamic section, so there are a few nuances that separate the Stelvio and the Grecale.

As for the rest of the engines, there is no official confirmation by the brand on how the final range will be formed, but we cannot help but dream of a Trofeo sports version, who knows if with a V8 biturbo under the hood, which complements this balanced microhybrid version.