Spain in cabrio (V): BMW Z4 with DO Rueda wines 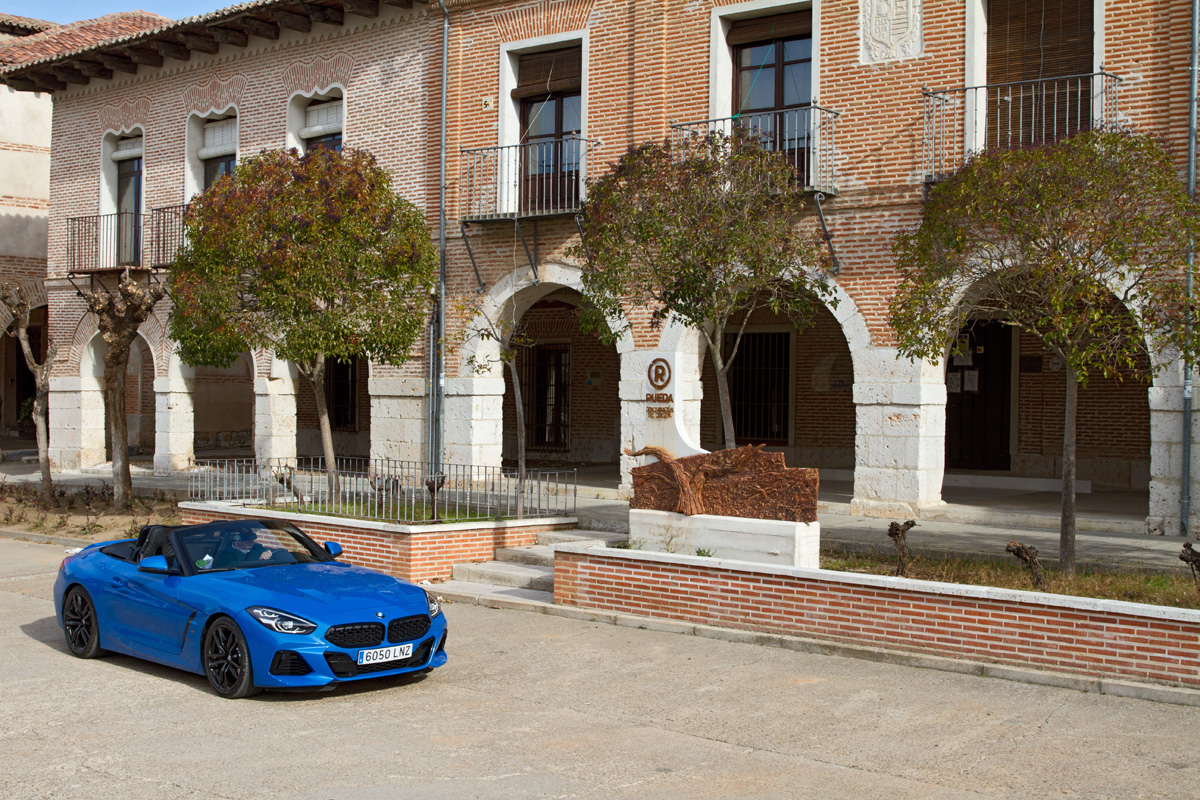 Be able to enjoy a BMW Z4 in its most daring version it has a point of spirituality. Road and wine are not incompatible because each has its moment. That is what makes some models wonderful. A sports car, which can be used on a day-to-day basis, must be versatile. From the street to the circuit, it is almost the same as going from the tavern to the restaurant.

Because, travel through the wineries and vineyards of the Rueda Denomination of Origin it has something very special that helps us dismantle topics.

For example, that convertibles they are not useful in the cold. Lie! A hood that raises and lowers easily, like that of the BMW Z4, and that when closed offers good soundproofing, is a good claim for a car that allows us to move comfortably on any road. The small details of its interior and its powerful engine are a perfect combination to travel while we perceive the smell of wet earth that comes to us when tracing the curves on the regional road that connects Madrigal de las Altas Torres and Medina del Campo or we check the care with the one who prunes the vines.

In the end, it is the taste for well done that counts. The work of an architect to design a state-of-the-art wine cellar is as important as the optimization of space in the interior of a trunk. The design of a vineyard has something of a competition circuit because in both places excellence is sought.

Just as the sound of the Z4 is part of the pride of the German brand, the wines of the DO Rueda son part of the national heritage and of Castilla y León. And it is that we are facing a product with history, since more than forty years ago this denomination of origin was created in order to recognize and protect the Verdejo variety, its flagship. The DO Rueda has very favorable natural means for the production of high quality wines and is specialized in the production of white wines, which have wide international recognition.

This area has three characteristics that make up the so-called “Wheel Character”: the continental climate – with large temperature differences between day and night -, the gravelly soils of the Duero depressions (rich in magnesium and calcium and with good aeration ) and the Verdejo grape. This autochthonous variety has been cultivated in the area since the 9th century, when Alfonso VI repopulated the Duero basin with – among others – the Mozarabs, who introduced it to the peninsula.

But, in addition to the intrinsic advantages that the terroir presents, the quality of DO Rueda wines would be impossible to achieve without the professionals who work in its production: winegrowers, winery technicians, oenologists …

In the town of Wheel, without going any further, we find visits to all kinds of wineries, being a good reference of the new wine tourism. The town has a rich and patriotic history, with Almanzor defeating the Castilian and Leonese armies in their lands to be later repopulated by Alfonso IV. There are corners that are well worth the trip there and a good walk, such as from the Church of the Assumption to Hermitage of the Christ of the Battles. In addition, the visitor must know that the underground cellars They run through the entire subsoil of the municipality, a preview of the pleasures that await us at the table.

If we move by road until La Seca, 5 kilometers from Rueda, we will arrive at what is considered to be the cradle of Verdejo. It is a town of just over 1,000 inhabitants with a interesting baroque cultural heritage well worth a visit. At the time of building its Town Hall, the mythical Ventura Rodríguez had a lot to do with it; and Gil de Hontañón in the part of his church.

To close the polyhedron we can get closer to Medina del Campo, perhaps the best known locality. A pre-Roman monumental villa 45 km from Valladolid which is the industrial and economic core liveliest and most important in the entire region, with a good range of leisure offers. its castillo it seems to keep an eye on the highway, where our BMW Z4, which has already said goodbye to its medieval brick, meets the asphalt again. We leave the vineyards behind with a good taste in our mouths. The one with the fruity touches, the right acidity and the floral nuances of the DO Rueda wines. Driving a Z4 is exciting. Taste them, too.